I grew up in the south of Greece... hot summers, mild winters, not a lot of rain (when I was at Uni, I would not bother to go to classes when it was raining... still managed to pass the exams as my absences were not that many... go figure how often did it rain!) and snow would come once in ever 5 years perhaps... And even then, it would only be for a few hours in the morning usually and then it would just melt leaving me an my brother so sad... We just loved it and still do! For me it also has a more special meaning as I remember the day my brother was born as the first time I saw snow! Tiny flakes falling by my feet! No, wasn't  much, but still it was one of those rare times and the first for the 3 (and a half) year-old me!

Sometimes, when we were children, our parents would even take us to short day trips only to be up on the mountains and enjoy a snow fight or two! And we still smile when we see the pictures of us in the early 80's  when lots of snow came down from the sky for the first time in our little town and we, small and colourful in our jackets and boots and cloves, had made a snowman in my grand mother's back yard! Ah, that feeling! And the stories to share with our friends for whom, them living in the same area,  snow was also a rare and beloved  treat!

I still feel this way about snow! And two days ago, I pulled the curtains in my bedroom and I saw the neighborhood all white! The view from the 12th floor was spectacular! The small park next to my building was all covered by a white sheet and the kids crossing it to go to the nearby school would leave their tiny marks on the whiteness... so pretty! So calm! Surely I had to drive to work and run errands afterwards but that did not spoil my mood... ok, I was a bit frightened about driving but it proved to be easier than I thought :)

So, yes, there's no doubt that a white snow-y scenery gives me a feeling better than shoes! And it is true that snow combines very well with shoes too as it is the best reason to go and get provided with a pair of stylish moon boots (Mark Jacobs perhaps?...) but even without them... it still feels grrrrreat!!

PS. Happy Holidays to everyone, I will be resting and (hopefully) enjoying "better than shoes" experiences for the coming two weeks so, see you all back here in the New Year! 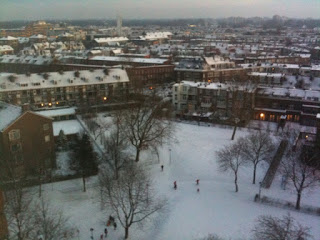 Email ThisBlogThis!Share to TwitterShare to FacebookShare to Pinterest
Labels: seasons

I'm an expat... just another one, nothing special. I left the Queen of the Aegean, my sunny home country, and the view of the Acropolis to come and work in The Netherlands... and did it for the money, plain and honest... money usually spent on shoes :)
And although my collection of those is a small treasure, the big treasure is elsewhere... It's in all the things that are, you guessed it, "better than shoes" :)
So this is what I will be writing about in this blog, no whining, no bitchin’, just sharing with all of you my, every day, positive experiences and good vibes. And perhaps you will be sharing yours with me!